If you plan on making an order in the near future, please be aware that shipping service options will be limited due to the Thanksgiving holiday. We will only ship Overnight orders out on Monday 11/22. All orders placed after 11/22 will be shipped out on Monday 11/29.

Russians usually call salmon caviar “red caviar”, but this was not always the case. Several centuries ago, sturgeon caviar was called red caviar in Russia although it is black in color. This misnomer occurred because the Russian words meaning “red” and “beautiful” share the same root. 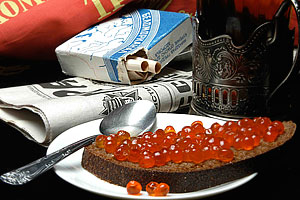 The first writings about grained sturgeon caviar are dated around the 13th century, when caviar was served exclusively at the tables of royalty. On the other hand, grained salmon caviar is relatively new to world cuisine. Many sources wrongly cite the first appearance of salmon caviar back to the 17th century, at the time of the first Russian exploration of the Far East. In reality, salmon caviar was not utilized until the early 20th century. Even when active exploration of the Far East was conducted, the only use for salmon roe was in simply salting the whole egg sack—called a skein—rather than in grained caviar. The Japanese prepared sujiko, layering roe in skeins on straw mats to salt them. Salmon skeins were salted like black sturgeon caviar, using a dry salt method. This product had little demand in Russia and cost 20 kopecks for 1 slug, which is roughly equivalent to 32 pounds. Grained salmon caviar, the product that today’s Russians grew up with, was first used about 100 years ago. Russian ikryanshiki (caviar makers), who traditionally worked with sturgeon caviar, started producing grained salmon caviar and delivering it to western Russia. The ikryanshiki used a new method for salting caviar: instead of using dry salt, they used brine saturated with table salt. Before salting, the caviar was separated from the skein and rubbed through fine netting called grohot. The new product was called grained salmon caviar. In the beginning of the 20th century, there was a high demand for grained salmon caviar in Japan. The Russian recipe appealed to the Japanese because of its appearance and taste. Japanese entrepreneurs learned this new method of caviar making and called it ikura, a word that echoes the Russian word for caviar, ikra. The new ikra was appealed also to Russians, making salmon caviar a strong competitor to the rare and expensive black sturgeon caviar.

Salmon caviar became known as “red caviar” in the time of the Soviet Union. In this case “red” referred to the caviar’s color to better distinguish it from black sturgeon caviar. In the USSR, red caviar was produced in only one size of packaging containing only 140 grams. This was consistent throughout the country because the production of caviar was government controlled. Black and red caviar were both in high demand making it extremely hard to acquire unless one had high-end connections. It was very hip to have black and red caviar sandwiches on the table in the 70’s and 80’s in Russia.